There is no doubt that high unemployment has been the main impact of the economic crisis in Spain and that many years will be needed to overcome this national disgrace.

This scourge particularly affects young unemployed, being Spain, along with Greece, the European country where youth unemployment reaches its highest peak, accounting for more than 50% of those under age 25. It has also hit long-term unemployed, as more than half of this group spend more than a year looking for a job. Given this dramatic situation, Spain’s unemployment protection system has demonstrated its incapacity to ensure an adequate level of social protection. Since 2012 the number of recipients of Spanish contribution-based Jobseeker’s Allowance has diminished by 12% and the Jobseeker’s Allowance (JSA) coverage rate stands at nearly 50% among those unemployed.

Given this dramatic reality, it is important to react. The main objective of the project that is being introduced here, #Empleo con Red, is to articulate a series of proposals that aim at reforming Spanish income-based JSA so as to ensure an adequate coverage both to young unemployed and to long-term unemployed. The project intends to put on the table a series of programmes and efficient actions to help the two aforementioned groups get into work. 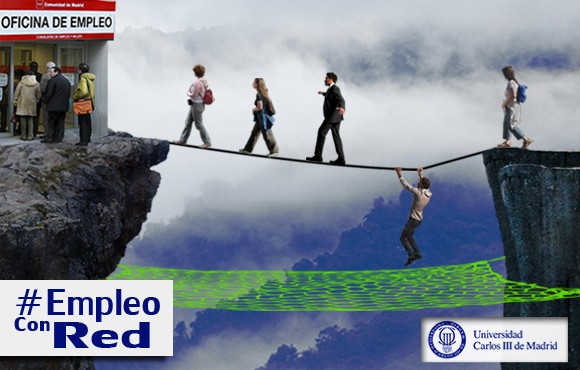 EmpleoConRed intends to elaborate a comparative proposal that would extend income-based JSA and improve labour-market policies for the groups that are affected the most by the crisis: young unemployed and long-term unemployed.

How can this be achieved?

Through a three-phase plan:
The first one involves a team of jurists and economists who would draw a proposal for reform including the following core points:
a) Income-based JSA for young unemployed
b) Income-based JSA for long-term unemployed
c) Financial viability
d) Programmes and actions within the framework of active labour market policies to help people re-enter the workforce

For the second phase the proposal would be published and ready for any amendment – based on national or international research – that may help improve the original version. This second phase would finish with an international meeting at Charles III University of Madrid (UC3M), where discussions may take place so as to further improve the text.

For the third phase the final document would be addressed to the different parliamentary groups and to the Government for their consideration.
Additionally, the scientific results of the whole process would be published.

The project seeks to improve social protection and return-to-work policies for the hardest hit: young unemployed and long-term unemployed.

Following the previous description, the project would be conceived as follows:

a) Firstly, the articulation of a proposal for reform of the current JSA coverage level and the creation of improved active labour-market policies. Thus, the most vulnerable target groups would be eligible for better social protection.

b) Secondly, the initial proposal would be contrasted with different views and alternative ideas that can be further discussed and developed at an international meeting at UC3M.

c) Finally, the resulting proposal would be introduced to the different social agents, to the Government and to the Parliamentary groups.

Members: role within the project and experience

EmpleoConRed requires an interdisciplinary team composed of renowned jurists and economists with broad experience in the field of labour relations and social protection. The team would have the following participants:

Cristina Gómez Aragón (Researcher)
Professor of Labour Law and Social Security at UC3M. Ms. Gómez is a Social Security specialist and one of her most outstanding works is based on her doctoral thesis: La prestación contributiva de la Seguridad Social: Lex Nova, 2013, Print.