Mention in the credits

Your first and last name will appear in the credits of the documentary.

Mention in the credits and digital postcard

Your first and last name will appear in the credits of the film + Somonte's digital postcard.

Somonte, the documentary on DVD

Recognition in the credits of the documentary + you will receive a preview DVD of the film + Shipping home.

Somonte, the documentary on DVD and Book-CD Gente del Pueblo

Recognition in the credits of the documentary + you will receive a preview of the film's DVD + Book-CD "El verso de Gente del Pueblo (1975 - 1986)" + Shipping home.

Recognition in the credits of the documentary + you will receive a preview of the film's DVD + Somonte's T-shirt illustrated by Joan Turu DVD + Shipping home.

Recognition in the credits of the documentary + you will receive a preview of the film's DVD + Somonte's T-shirt illustrated by Joan Turu DVD + Book-CD "El verso de Gente del Pueblo (1975 - 1986)" + Shipping home.

Recognition in the credits of the documentary + you will receive a preview of the film's DVD + 5 Somonte's T-shirts illustrated by Joan Turu + Shipping home.

Highlighted acknowledgement with Logo featured in the credits of the documentary + you will receive a preview scoop of 5 DVD's of the film + 5 Somonte's T-shirts illustrated by Joan Turu + Shipping home.

Highlighted acknowledgement with Logo featured in the credits of the documentary + you will receive a preview scoop of 5 DVD's of the film + 5 Somonte's T-shirts illustrated by Joan Turu + Premiere of the documentary within the Spanish state with participation of the director + Shipping home.

An example of landless labourers in Andalusia who have collectivized the difficulties to overcome them with fight and dignity.

"April in flowering spring, the morning light is already leaning, there are determined steps on the sidewalls, light as a flying dove. Somonte is a land that belongs to the people, a land that some want to undersell and give it away, but the labourer people out of work went determined to take it.

The people resist the conviction, refuses to die around the corner, waging their battle against unemployment; the dawn of the future is headed. If there is land abandonment, and people who hardly lives without a job, we will have to take it and dig it, opening new grooves, new pits. The day has been hard and has rendered, silent, the people is already sleeping, in the land of the future and hope, the dreams for Somonte are born.

Black shadows came at night, hidden in the shadows they entered, berets, black uniform and weapons, and they swiped a white dream. They came with their miserable hate, knocking on the door, they pulled it down, with blows that overwhelm illusions, they were expelled from the taken earth. There is no blow that can take away their dreams; if the people know well their way, a thousand times they got kicked out of Somonte, thousand times will return to their destiny.

Letter to Somonte from the Gente del Pueblo group 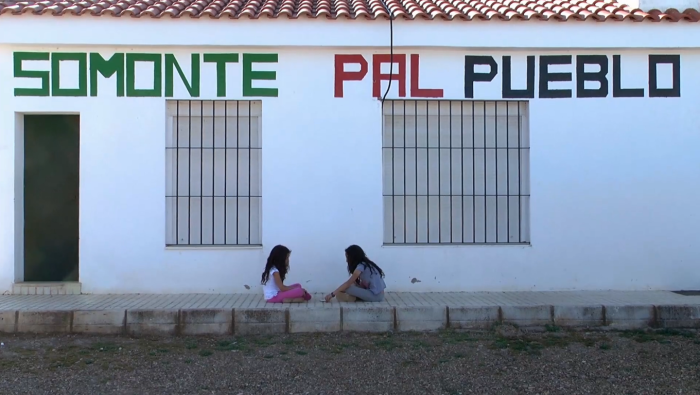 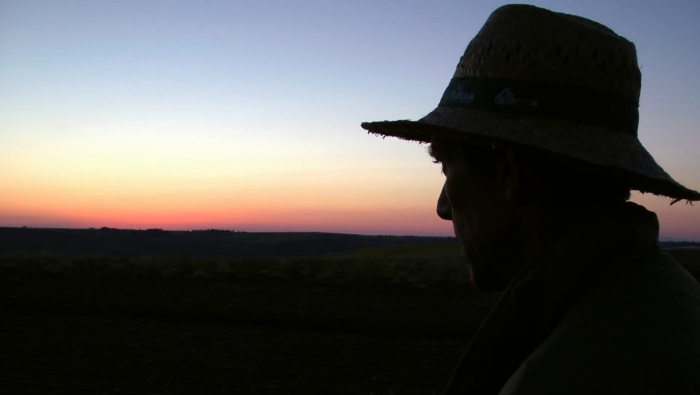 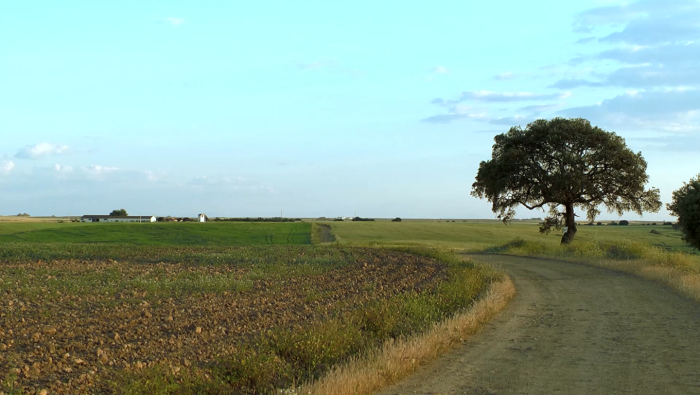 In the fourth region in Europe with more poverty, with nearly 37% unemployment according to official data of the Spanish National Statistical Office, the council of Andalusia wanted to sell the Somonte farm: 400 acres located within 11 kilometers of Palma del Rio, in the province of Cordoba. These lands could provide many jobs under public administration, now its done under the management of the people, thanks to the five hundred labourers of Andalusian Workers Union (SAT) that occupied the land on 4th of March, 2012.
In the documentary "Somonte: land and dignity" a group of Andalusian labourers will show how land occupation allows them to overcome situations of dire need such as unemployment, evictions and the difficulties to feed themselves. In the day to day of the community, the cast of the documentary will propose a reflection on the options to escape from the crisis, from a collective and legitimate point of view, to achieve employment, food and dignity.

Even the farm walls speak with significant and emancipatory messages like this one from Diamantino García: “There are no lost causes, there are difficult causes, but because they are so fair, someday we will win”. The documentary consequently will collect the strength of the place and its people through the testimonies of labourers, of international visitors in solidarity with the cause, of Diego Cañamero, national spokesman of the Andalusian Workers Union (SAT), of Juan Manuel Sánchez Gordillo, Mayor of Marinaleda City Council, and the songs of the committed group Gente del Pueblo. 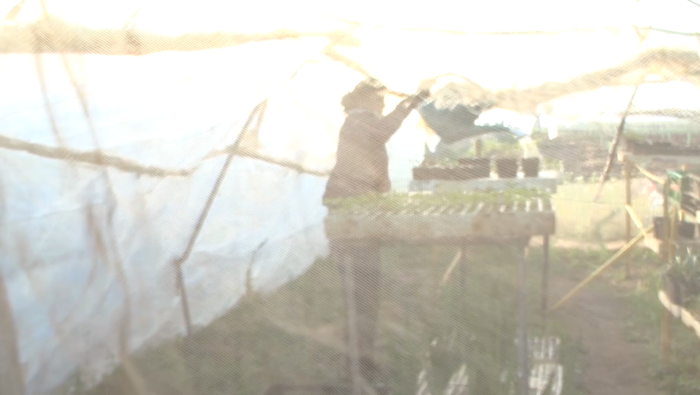 Unemployment, evictions and feeding difficulties of thousands of families. Gifts to the bankers and the privatization of public assets, cuts in education and health particularly affecting our children and grandparents ... All of this make us feel outraged and we feel we must act. The Somonte documentary allows us to turn this anger into something positive.

On a more personal level Damià Caro, a member of the COMSOC Association – Comunicació Social, in 2005 had the opportunity to travel to Brazil to get to know the Movimiento Sin Tierra (Landless Movement) and the experience moved him so much that after a few months he went back to participate in the field of communication of the movement.

He lived with families who had difficulties of work, food and shelter, but despite suffering these shortcomings they possessed a great capacity to overcome problems which filled them with dignity and rebellion. They occupied lands, resisted the evictions and produced food, always from the collective strength.

In March 2012 he was surprised by a story he read on the Internet: dozens of Andalusian labourers, organized through the Andalusian Workers Union (SAT) had occupied the Somonte's farm to avoid privatization and to dig the 400 hectares of unproductive land located in the province of Cordoba. On April the 4th, the day they were celebrating the first month of the occupation, Damià was among them. To this day he maintains the encouragement, along with a good technical team, to show the example of Somonte.

"Somonte is not a dream but a reality" we have told us several times. It is a reality that has hundreds of hectares of trees, cereals, legumes, fruits and vegetables. We are told that all this work in the field would not have been possible without the solidarity of hundreds of people and communities from different villages of Andalusia, of the Spanish State and of the world. It is especially to these people and to these groups in solidarity with Somonte that we ask collaboration to make a documentary that will promote this example to be spread to other lands, like seeds in the wind. 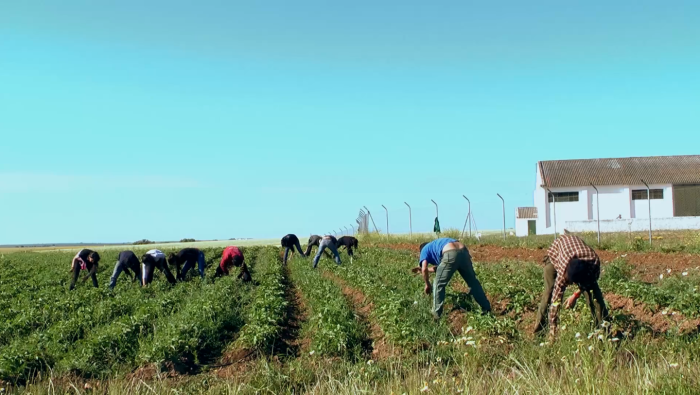 With all our efforts and volunteer work, with the phases of pre-production and filming, we have made it possible to begin the realization of the Somonte documentary, and now we need your support to finish it. With the Crowdfunding campaign we aim to continue with the post-production and also to be able to record the documentary into DVD's so that the Somonte message reaches the more the better sites.

As you can see, as donation rewards we count with the support of the loved music group the Gente del Pueblo, who kindly donated their book-CD “El verso de Gente del Pueblo (1975 - 1986)", and the artist Joan Turu, who present us with the drawing for the T-shirt.

Help us to reach the minimum target and we will finish the documentary. If we reach the optimal objective we can cover most costs of post-production and we will be ready to present the film to international festivals.

The COMSOC Association - Comunicació Social encourages since 2008 a communication and transformative education through different tools. In particular this documentary has relied on the cooperation of specialized technicians to promote food and popular sovereignty. This concept was set by Via Campesina in 1996 and is presented as one of the most powerful alternatives to the food, poverty and climate crisis.

People, who constitute part of this group, assembly and self-managed, believe communication and freedom of expression as human rights that must be consolidated beyond the institutions and companies. Communication understood as the opportunity to teach and learn from others, as an opportunity to generate collective knowledge. Consequently, we advocate the free flow of information and pursue open licenses (Creative Commons) against Copyright.

The post-production of the documentary will feature the work of METROMUSTER, an independent producer who has experienced with art, communication and politics since 2010. Its main objective is to contribute to social change through the empowerment of all communities and collective groups who are fighting, alternative ways of understanding the living spaces and the recovery of historical memory forms. He recently received the award for Best Documentary at the Malaga Film Festival with the audiovisual Ciudad Muerta.